My card today was very heavily influenced by Kristina Werner's card here.
The challenge on one layer wednesday this week is to create a scene.  (I'm guessing Karen doesn't intend for us to go & have a tantrum in the nearest restaurant).  I used the modern landscape die to create a mask, having first printed out my digital images.  The trees & house were a bit lost to start with, so I outlined the house with thin black marker, to create a visual triangle with the sled & the snowman.  BIG mistake.  Now the house was all my eye could focus on.  I have managed to soften it a little, with repeated applications of white gel pen, but I'm still not entirely happy.  What I do like however, is the 'snow' effect achieved by sponging on hammered card.  This was completely accidental.
The Tiny Treasures set also includes a penguin, so I might have another go with that & an igloo.
Linking to:
One Layer Wednesday: OLW116~ Scene It
Posted by Jenny @ I-dream-in-paper.blogspot.co.uk at 09:57 10 comments:

Jingle all the way...

Forgive me bloggers for I have sinned: it has been eleven days since my last post.  Guess you didn't even notice I was gone.
Well I have been a wee bit busy (still decorating...) preparing for & teaching a Christmas card class in the village hall.  It was worth the hard work though, we had a very creative morning.  And it inspired me in all sorts of ways  too.


Now I've finally got some time to sit down & work through some of my ideas.  Hurray.  I embossed the snowflakes using my Cuttlebug & an embossing mat, & dotted some stickles around, but I can't see them in the photo. The sentiment was done on the computer, & the jingle stuck on afterwards.
Linking to:
Less is More: Week 95 ~ Glamour & Glitz
Addicted to CAS: ATCAS#1 ~ SNOW
Posted by Jenny @ I-dream-in-paper.blogspot.co.uk at 14:49 23 comments:

Snowflake with a twist

It's official.  I'm in love.  OK, I know it happens quite a lot, but this time I REALLY mean it.  The Parker alphabet from Memory Box is just FAB.  Clean, simple, not too big, not too small, cuts with a single pass.... & didn't cost an arm & a leg!
Anyway, moving swiftly on:  CAS-ual Fridays have got the blues today.  Snowflakes abound in the design team's creations and, never being one to let a bandwagon pass me by, I scrambled aboard to join them.  So I decided to create a snowflake using a new font I found whilst cruising Pinterest.  Quite a simple affair, just a single phrase copied & reflected a few times, but I like the effect.  After many iterations (mainly because I enjoyed playing with these dies so much - did I mention that?) the sentiment came together with a sparkle.
Linking to:
CAS-ual Fridays: CFC79 ~ Winter Blues
Posted by Jenny @ I-dream-in-paper.blogspot.co.uk at 11:26 5 comments:

Having made a die cut 'thanks' for yesterday's CASology, I happened upon this week's One Layer Wednesday with the debris still around me.  It was the perfect opportunity to use the negative from the die cut with a bit of gentle sponging.  The brief is to make a Christmas thank you card.  So I thought presents (that's really what Xmas means in my heathen household...).  Not a present stamp to be found.  What's a girl to do?  Dig out the foam & the hole punch: 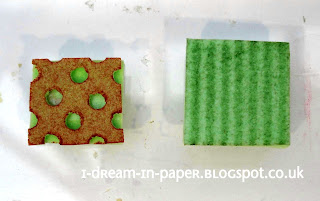 Stick it on the acrylic block with temporary adhesive & away we go.  Nice & simple, easy to do in bulk.  Assuming Santa stops here, of course!
Linking to:
One Layer Wednesday: OLW114 ~ a Christmas thank you
CASology: Week #19 ~ Thanks

This card was inspired by yesterday's post from Kristina Werner.  I cut the letters with my Silhouette, but I confess that I wasn't sure how well it would do in the centre of the 'a' & the 'h' (I know this blade is on its last knockings...).  I made it cut 3 times, just to be sure!  The white thanks is 2-ply, with just a single layer of aqua thanks behind for shadow, stuck together using standard PVA applied with a fine paintbrush. 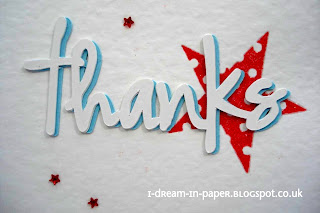 It doesn't show in the photo, but the star is clear embossed for a bit of shine.  Do you like the 'randomly' placed bling?  Positioning those 3 stars took longer than the rest of the card put together!
Linking to:
CASology: Week #19 ~ Thanks
Posted by Jenny @ I-dream-in-paper.blogspot.co.uk at 09:38 9 comments:

Great one layer challenge at LIM this week.  Houses.  I do love a house.  Simple shape, based on a square, easy to make central...
So the Christmas card run continues.  House, heart & bottom sentiment drawn digitally, central heart cut out on the Silhouette.  Printed out another house on scrap & cut it out to use as a mask for the inside of the card: 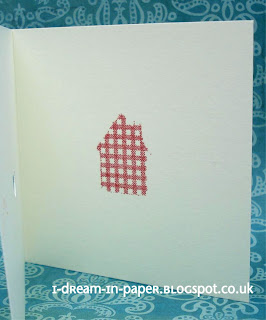 I'm playing around with a larger version too.  If it comes to anything, I'll post it tomorrow.
Linking to:
Less is More: Week 93 (one Layer) ~ Houses
Posted by Jenny @ I-dream-in-paper.blogspot.co.uk at 14:05 13 comments:

I saw ORANGE on CASology this week & immediately thought ELEPHANT.  A natural connection (!).  The elephant is from the Silhouette Store, printed on glossy photo paper for contrast against the linen textured card base.  The imperfect stamping makes the chevrons look shiny in the photo, but they're not.  More 'rustic'. 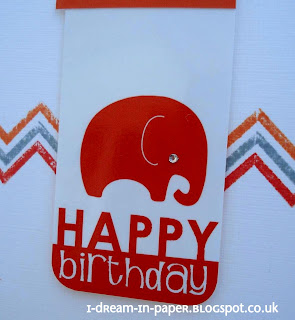 A timely challenge from CAS-ual Fridays for a male card, inspired by this week's CAS(E) This Sketch.  No ink, no stamps.  I arranged my digital splats, printed out 3 copies & got busy with my circle punches. 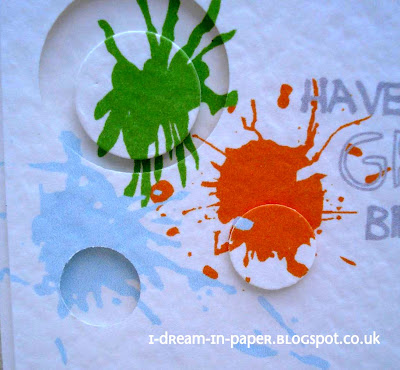