I've been dithering over this die for a while now, but seeing Donna's FAB winning entry on CASology this week just pushed me over the edge.  This is a blatant case of her card, but I love it so much, I don't care!
The sentiment just jumped out at me & begged to be paired with the simple landscape.

Next day edit: I have just realised that this could also have been inspired by my blog header, qualifying for CAS-ual Fridays this week.  The aqua & white colour scheme, the simple tree-line is the same modern style as my main header font & the sentiment placed similarly to my 'housework' note.  This must have been subliminal!  Am tempted to add in some red to my header now...
Linking to:
Less is More: Week 87 ~ Love & Marriage.
CAS-ual Fridays: CFC72 ~ Toot Your Own Horn
Posted by Jenny @ I-dream-in-paper.blogspot.co.uk at 16:25 33 comments:

This week's Tuesday Trigger is: 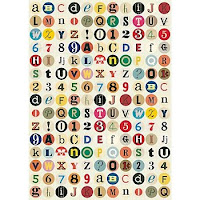 Now that September is nearly over, I feel justified in making a few more Xmas cards.  I think the inspiration is clear to see - I've just turned a couple of the numbers into baubles.
Linking to:
Tuesday Trigger: Soup to Nuts
﻿
Posted by Jenny @ I-dream-in-paper.blogspot.co.uk at 14:47 11 comments:

Inspired by masking on One Layer Wednesday this week. I stamped the distressed tree from Get Merry, cut it out & stuck it down, then stamped across it with the banners.  Simples!
Linking to:
One Layer Wednesday: OLW107 ~ Masking 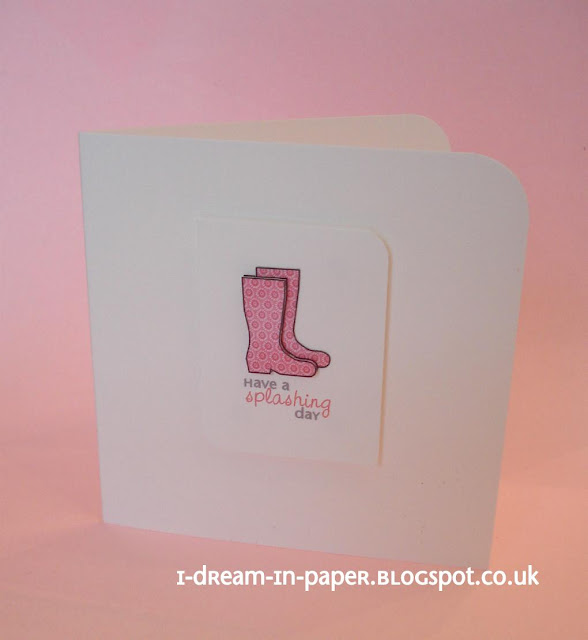 It looks as if what passes for summer in the UK has definitely finished.  It is cold & gloomy here (just another excuse for poor photos...), with lashings of rain.  So what better than a cheery pair of wellies?
I made the digital stamp from some clip art, & used digital paper too, printing on to glossy photo paper to get some shine.  I cut out 2 versions, so I could pop up the front boot on sticky pads.  It was very tricky to cut out, as it is so small. 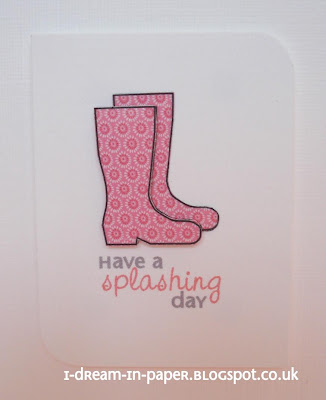 The corners of the white panel were rounded with my corner chomper, as was the card base.

Long ago & far away, before Pinterest (yes, there was such a time) I saw this idea as artwork.  I thought "I could do that".  And then did nothing.  I have had a flick around likely sites today, but have failed to come up with the original piece.  If you know where to find it, please let me know.
CASology are using WHITE as the challenge word this week, & that's what triggered my memory.  Prior to today, I have scoffed at the idea of square punches.  I have pooh-poohed them soundly.  Because any fool can cut a square, right?  Wrong.  At least, this fool can cut one, but apparently not 12 identical ones. Even when I cut a strip & then only had to chop it up at the right intervals. Perhaps the picture I should be showing you is of my table, covered in over-large confetti comprised of squares-that-didn't fit & squares-that-can't-be-folded-exactly-in-half. I think a square punch may well be on my Christmas list. 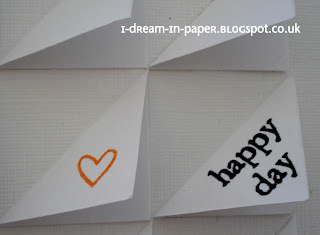 Anyway, the card is a 5" square, & I used a 1/2" border all round to position my folded squares correctly.  I learned the hard way to stamp first, fold & stick later.
I just hope it's white enough.
Linking to:
CASology: Week 11 ~ White
CAS-ual Fridays: CFC70 B&W plus one
Posted by Jenny @ I-dream-in-paper.blogspot.co.uk at 11:39 27 comments:

Hmmnn.  The spotted paper looks a but sludgy in this picture.  IRL it's much nearer to the darker green of the leaves.
As well as photography, I'm having real trouble with layouts lately, in particular where to put a sentiment.  Which is why I so often don't bother.  I tried all sorts of combinations for the above, before deciding on the computer generated strip.  Any tips?
Linking to:
Less is More: Week 85 (Theme) ~ Oval
Posted by Jenny @ I-dream-in-paper.blogspot.co.uk at 11:09 3 comments:

Listen.  Can you hear that?  Yup.  Nothing.  No kids rummaging through the Lego box.  No cat yowling.  No builders hammering.  It's just me.  For the first time in months.  Hurrah.
So I thought I'd have a go at something a bit different.  I saw this idea for a flower ages ago, & squirrelled it away in my head. 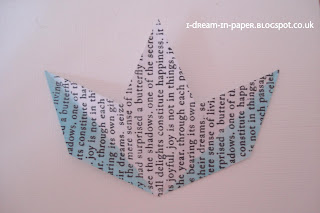 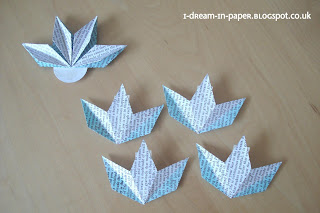 I used my Silhouette SD to create & cut out the leaf shapes from 3 diamonds, stamped them with the text pattern, then coloured the outside edges with ProMarker.  By folding the outside diamonds in half & sticking them behind the middle diamond, you get a nice 3D effect.  All 8 were then stuck on a circle to create the flower. 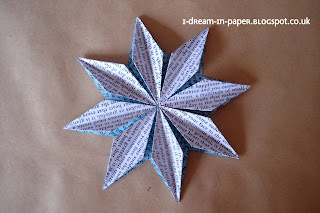 Adding a brad & a couple of punch squares coloured with the same pen finished the embellishment. 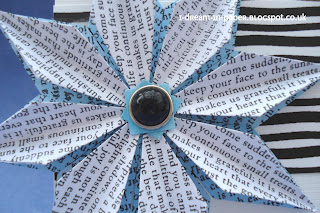 A couple of strips of stripey paper for ribbons & 3 tiny squares in the bottom corner to balance things out, et voila.  I just hope it's CAS enough for the challenge. 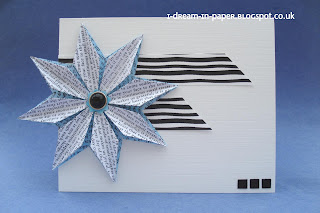 Can you believe this is my 100th post?  Me neither.  So I've that's 90ish cards I've made since April.  I know I haven't sent that many, so I'd better look them out & see if I can sell any.  I daren't even count the hours that amounts to (& then there's the blogging hours...).  Just as well DH doesn't read this blog.  Still, there's no point even trying to clear up the mess at the moment.  I currently have 7 men in my house making dust.  I don't stand a chance.
Anyway, I digress...  100 posts, so what could be more appropriate than fireworks?  Autumnal (November 5th) for One Layer Wednesday, Sky for CASology & embossed for CAS-ual Fridays.  As I don't have much in the way of embossing powder, I stamped in Versamark before the colour, to give the powder a fighting chance of sticking.  Then I masked off the rectangle & sponged with aqua & grey for the sky.  I must tell you, this isn't quite how it looked in my head, nor is it the first attempt, but you just go with it, right?
Linking to:
CASology: Week 10 ~ Sky
CAS-ual Fridays: CFC69 ~ embossing
One Layer Wednesday: OLW105 ~ Autumn
Posted by Jenny @ I-dream-in-paper.blogspot.co.uk at 14:34 8 comments:

I stumbled across another challenge during my meanderings around blog-land - The Craft's Meow. 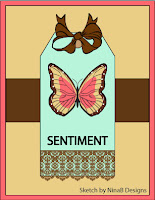 Normally I avoid sketch challenges like the plague, much too difficult, but this is the second in 2 days.  Maybe it's not my mojo that came back yesterday; maybe I'm fostering someone else's for a while.  In which case, whoever has mine, please keep it topped up with wine & crisps.
Linking to:
The Craft's Meow: September Sketch
Posted by Jenny @ I-dream-in-paper.blogspot.co.uk at 11:05 4 comments:

I'm not sure why I've never entered retro sketches before, but I have had a look every week.  This week it managed to coax my struggling mojo out from beneath the builders' dust.
Masking was no problem with my fabby new Pritt on & off roller.  It's the best temporary adhesive I've used.
Stamping was more of an issue. I like the look of the linen effect card, but it's a bit of a nightmare to stamp on, as you can see towards the top left of the chevrons.  Had to prune the twine a bit too, as it was rather hirsute.
Enough of the moaning already! I'm pleased with the final outcome.
Linking to:
Retro sketches 28
Less is More: Week 84, one layer ~ Foliage
Posted by Jenny @ I-dream-in-paper.blogspot.co.uk at 11:24 7 comments:

It's the dreaded one layer week over at Less is More, using foliage.  I made a template from scrap paper & stamped through it, then stuck it on the inside of the front to score the rectangle in the right place.  Nice & simple.  I think I'll use it for Christmas, but it could work for other occasions too. 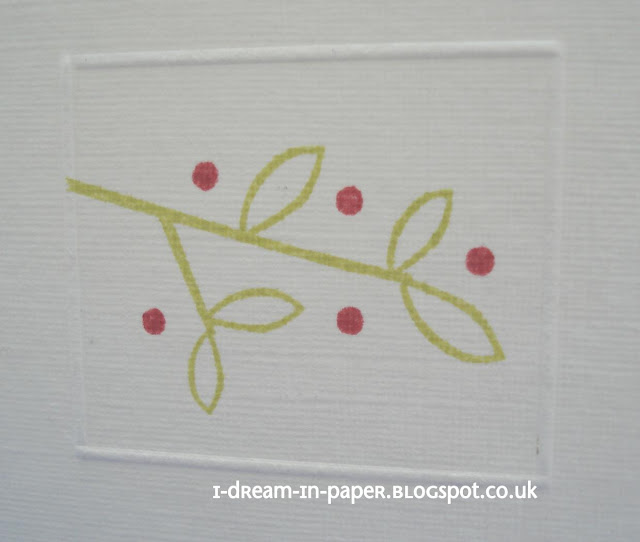 Why punctuation is important...

Our family has always been a stickler for the proper use of the English language.  The times I was corrected as a child not to say "aren't I", but "am I not"!  And yes, now I find myself doing exactly the same with my kids.  It's true, you do turn into your parents...
So when I saw this saying on pinterest, I knew straight away what to do with it.  I'm entering it into CASology this week, 'cos the word is FAMILY.
Must dash, Village Fete today & I've got 101 things to do.  Hoping to fit in LIM tomorrow.
Linking to:
CASology Week 9 ~ Family
Posted by Jenny @ I-dream-in-paper.blogspot.co.uk at 08:05 7 comments:

Here is one of my favourite projects from a couple of Christmases ago, when this blog wasn't even a twinkle in anyone's eye.  I love gingham & kraft together, to me, it just screams Christmas.
It was very simple to make, triangles of red & gingham (a freebie from Activity Village), a circle punch & a pair of scissors.  Fussy cutting the gingerbread man was losing its appeal by the 50th one (I made a number of strings, packaged them & sold them at a craft fair..), but he is kinda cute.
When the triangles were assembled, I made a template & used my crop-a-dile to make sure the ribbon holes were in the same place on each one.

I made the owl using this tutorial here as a guide, but used the heart punch for the toes & the beak, & a CuttleBug bracket for the head / ears shape.  Inspired (too late...) by last week's LIM tearing challenge, I created a rough tree, then added a sponged pink branch for the owl to sit on. 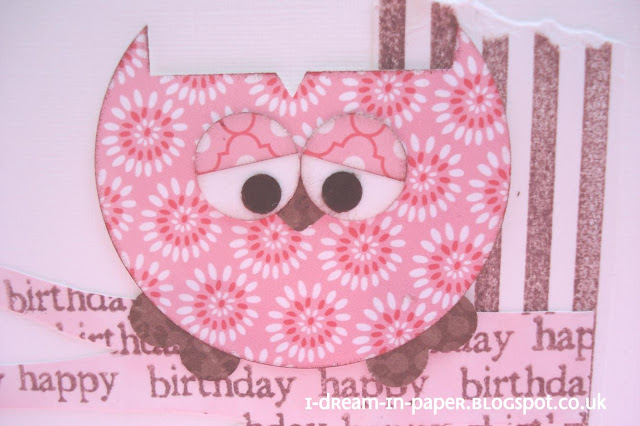 Still sifting thro' post holiday ironing, & the shopping is due to be delivered any minute, so had better go & look busy... Nearly Wednesday.  I can hold on till then!